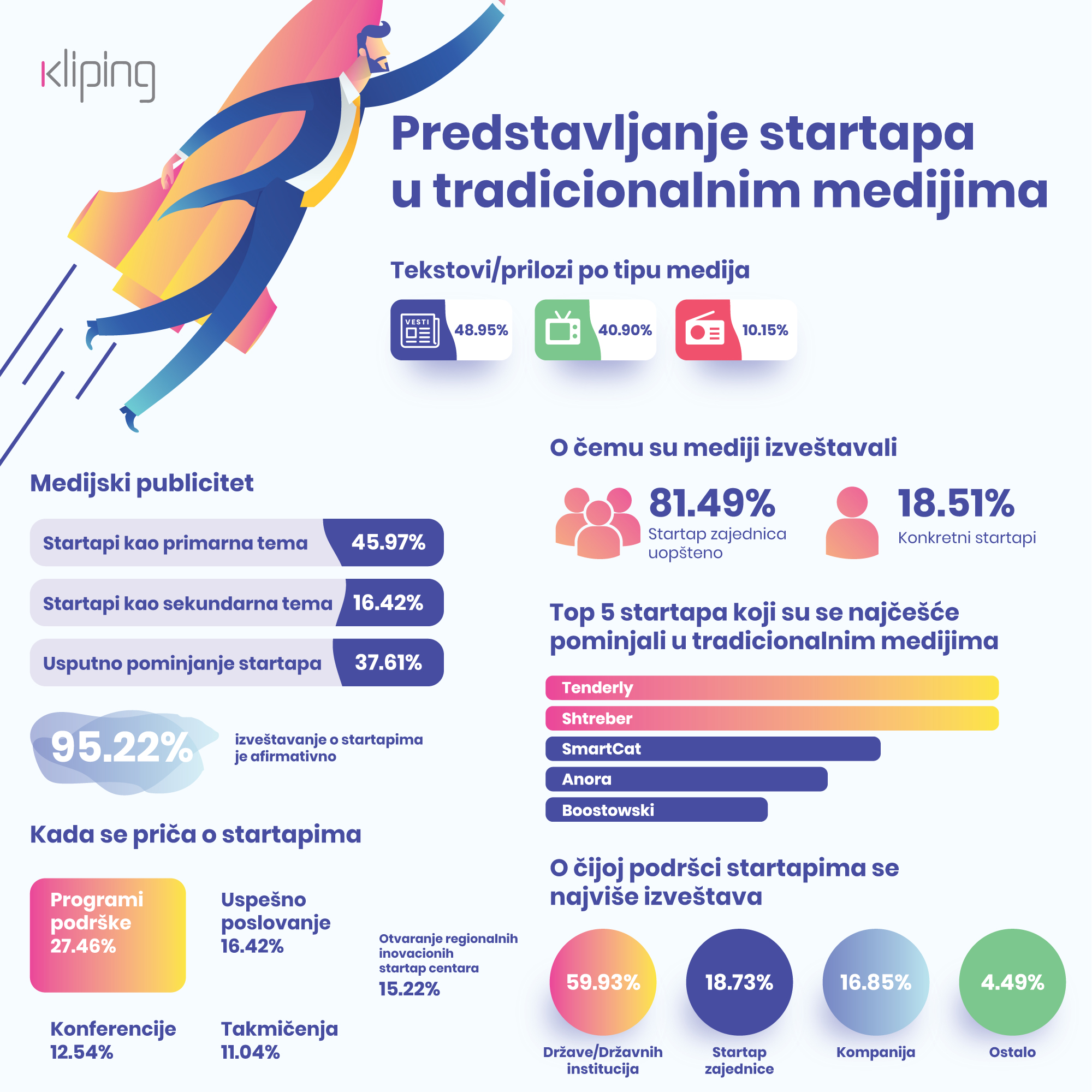 The key to success is to get yourself going and do something. Quite simple really. Many people have ideas, but few people decide to do something about it right away. Not tomorrow. Not next week. Today. A real entrepreneur is a man of action, not a dreamer (Nolan Bushnell, entrepreneur, creator of the first commercially sold arcade video game Computer Space).

We are increasingly witnessing that in the media, among people on social networks, at events, there is talk about these “small” companies, so-called start-ups… So we hear news that “we need to invest more in start-ups”, that “this is the future”, that “our young and talented programmers have developed an application that won a competition”. It is as if everyone came up with some new ideas, innovative solutions and started to conquer Serbia and the world with their talent. Guided by the assumption of the ubiquity of the topic of start-ups, we carried out a survey on the representation of start-ups in traditional media during the second quarter of 2019.

The analysis has shown that in traditional media, start-ups appear on average five times a day, most often as the primary topic (45.97%), and that 95.22% of texts are dominated by positive reporting in which entrepreneurial ideas are supported. The media generally does not write about specific start-ups, but about the start-up community overall – how to implement a good idea, how much certain companies, the government and the start-up community are ready to help them through competitions, educations, conferences, and what awaits them along this path and implementing this type of business. Given the global use of the term, journalists and their interlocutors often identify start-ups, which imply innovation and new employment, with self-employment, leaving the impression that every bakery, hairdresser or farm can be a start-up.

Product development in the fields of education, tools that help companies educate their employees in the field of sales, software for optimization and control of electricity consumption of air conditioners, “smart gloves” intended for the blind and visually impaired people – these are ideas of start-ups that were mentioned most often in the analysed quarter. Like their visions, the start-up founders and users are completely different, which shows that this is a field where there is a lot of room for creativity and improvement.

Start-ups in Serbia and around the world have undoubtedly become a source of new ideas and innovations, which the media reports in a timely manner. Their unique feature of approaching traditional problems in an entirely new way, among other things, gives the marketing industry a chance to make further progress. Through joint work, marketing agencies can step outside the framework of usual practices, improve their business, and start-ups get a professional team of experts who will accompany and advise them on the way to the realization of ideas and success. Some of these “small” start-ups could become the next Nordeus or Facebook…